– Security has been beefed up at APC national secretariat in Abuja

– This is in anticipation of the continued protest by members demanding the removal of Comrade Adams Oshiomhole, as the national chairman

Ahead of the continued protest for the removal of Comrade Adams Oshiomhole, as the national chairman of the APC by party members in Abuja, security has been beefed up at the entrance of the national secretariat.

In order to maintain peace and order, more police officers in a vehicle were brought to the national secretariat to assist the resident police security men, New Telegraph reports.

Meanwhile, a vehicle of the Department of State Service (DSS) was packed close to entrance gate. Speaking to the online publication, one of the protesters and a member of the APC Progressive Youth Movement said the protest would every other day until Oshiomhole is removed. 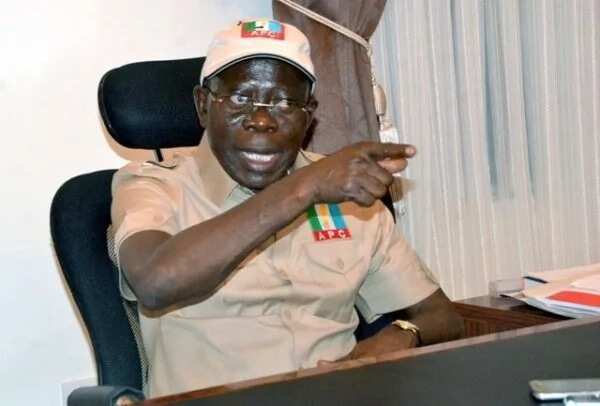 Meanwhile, Legit.ng previously reported that some protesters on Monday, February 17, converged at the All Progressives Congress (APC) secretariat in Abuja to demand the removal of the national chairman of Adams Oshiomhole, over the party’s loss of Bayelsa governorship seat.

Protesters under the aegis of Concerned APC Youths stated that Oshiomhole should be replaced to save the APC from losing more states to the opposition.

Oshiomhole’s in response to protests by some alleged APC supporters at the party’s national secretariat in Abuja on Monday, February 17, demanding Oshiomhole’s removal from office.