Popular business mogul and father to sensational DJ and musician, Cuppy, Femi Otedola, has recently revealed why he donated the sum of N5 billion to a charity organization in Abuja.

The Nation reports that the earlier in November the businessman gave out the sum to the Save The Children organization in its aim to intervene in the northeast.

It should be noted that the charity outfit is the a 100-year-old United Kingdom orgnaisation and is the biggest organization ranked after UNICEF.

In his comment on why he made the donation through his daughter, Otedola has taken risk and gotten success and recognition in life.

“A lot of people think when they die, they take their money with them, we’ll see. In my journey of life, I have taken the risk, I’ve done the chase, I’ve enjoyed the thrill and I have achieved success and recognition. What next? You give it back,” he said.

Meanwhile, Legit.ng earlier reported that Femi Otedola, a Nigerian billionaire and father of DJ turned singer Florence Ifeoluwa Otedola, promised to provide a full-ride scholarship to the university level for a little girl.

The billionaire made the decision after the unidentified little girl was spotted singing his daughter’s latest song. Otedola shared the video, telling his daughter to find the girl to fulfill his promise of providing for her education.

Would you rather have money or be poor and have a good family? – on Legit TV 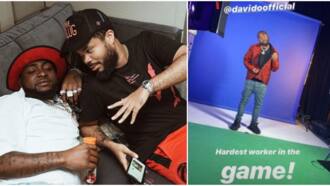