The Independent National Electoral Commission (INEC) has fixed Saturday, November 30, as the date for the conduct of the supplementary election in the Kogi West senatorial district.

The electoral commission in a statement on Twitter said it arrived at the decision after a meeting held on Thursday, 21 November.

“INEC met today 21st November 2019 and fixed 30th Nov 2019 for the conduct of Supplementary and re-run elections for Kogi West Senatorial District and Ajaokuta Federal Constituency respectively,” the statement from the commissions read.

While Senator Smart Adeyemi of the All Progressives Congress (APC) has 80,118, Senator Dino Melaye of the Peoples Democratic Party (PDP) polled 59,548, a winner has yet to be declared. 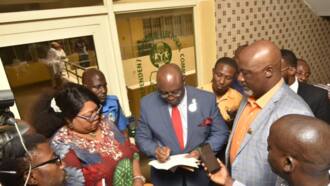 The contest is between Smart Adeyemi of the All Progressives Congress (APC) and Dino Melaye of the Peoples Democratic Party (PDP).

The Melaye disclosed in a tweet that he presented along with the petition, 21 video clips documenting the reported electoral malpractices that occurred during the poll.

The politician said he was received by the INEC secretary, Rose Orianran-Anthony and the national commissioner Festus Okoye.

In a related report, Melaye has promised to report Governor Yahaya Bello and other politicians in Kogi state to the International Criminal Court (ICC) over the alleged violence that occurred during the senatorial and governorship election in the state.

Melaye, who is currently battling to get re-elected in the National Assembly, is trailing his opponent, Smart Adeyemi in the Kogi West senatorial district rerun poll.

But the former lawmaker, in a post on Twitter on Tuesday, November 19, said what occurred in Kogi state was more of a civil war than an election.