– The Nigerian Army recorded the victory with support from fighter jets

An attempt by the insurgents to attack along Gashua road in Damaturu, Yobe state was on Sunday, February 16, foiled by the Nigerian Army with support from fighter jets.

Residents of the community speaking to the TV station disclosed the insurgents were sighted advancing to the state capital along Babangida town, Tarmuwa local government council around 5.00 pm.

However, people in the area have confirmed peace has been restored along Gashua road in Damaturu. 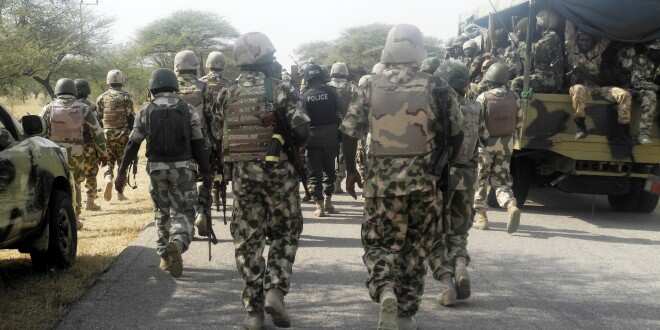 Meanwhile, Legit.ng had earlier reported that Nigerian soldiers of 25 Task Force Brigade deployed at Damboa in Borno State in conjunction with elements of the Civilian Joint Task Force killed scores of terrorists.

In a related development, Jiddari-Polo, a suburb near Maiduguri, the capital of Borno state was attacked by Boko Haram insurgents. The terrorists attacked the area around 7.05 pm after the Muslim prayer, shooting sporadically as residents scampered for safety.

Troops of the Nigerian Army, local hunters and civilian JTF, were, however, sighted moving towards the sight of the attack as residents of the affected area fled their homes in panic.

He revealed this information on Tuesday, February 11, while parading 25 suspected criminals.

NAIJ.com (naija.ng) -> Legit.ng We have updated to serve you better.