The PureView system by Nokia was once among the leading mobile photography systems years ago. After living through multiple operating systems such as Symbian and Windows Phone, this camera system has made a comeback in the Android era. The Nokia 9 PureView was launched earlier in the year, with the highlight feature being a six-camera setup. It also has a fantastic display and wireless charging. The Nokia 9 PureView release date was February 2019. The phone was launched as a limited-edition device, meaning that it is relatively rare in the market. In Nigeria, the Nokia 9 PureView price is currently about ₦215,000 in SLOT stores. This is relatively cheap, considering the numerous top features that buyers will enjoy. While most manufacturers are rolling out smartphones with triple and quad cameras, Nokia has set the bar even higher with the Nokia 9.

Here is a look at the pros and cons of the device;

Here are the main features of Nokia 9 PureView; 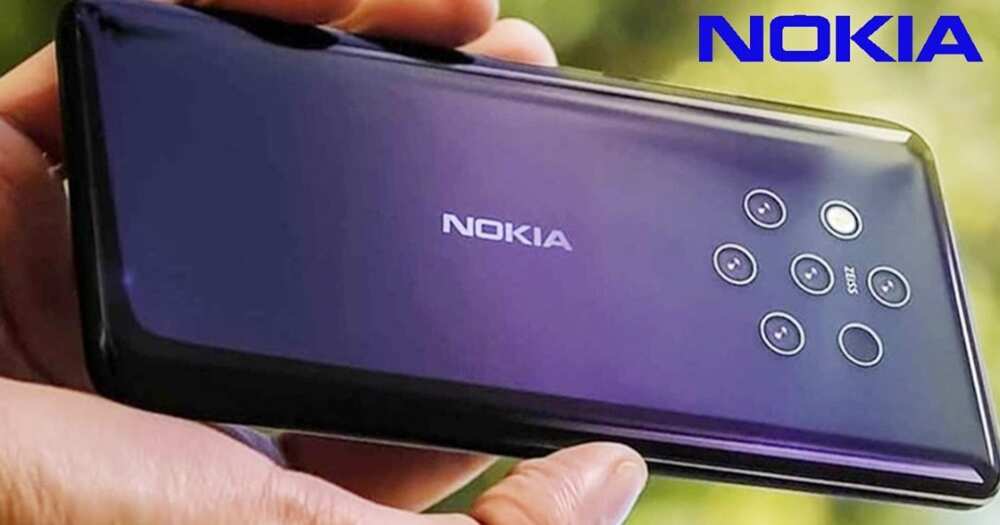 Here is a look at the device’s hardware aspects;

Design-wise, the smartphone looks like most dual-glass smartphones out there. The one significant difference is the lack of a camera hump at the back. Despite having a whopping six cameras, the camera module is entirely flush with the glass back. The device is also relatively thin at only 8 millimetres. Two panels of Corning’s Gorilla Glass protect the front and back of the device, while an aluminium panel holds the phone together.

A 5.99-inch P-OLED screen with an aspect ratio of 18:9 primarily occupies the front. There is an under-display fingerprint sensor near the bottom of the screen. This configuration is slowly replacing the once-popular rear-mounted fingerprint sensors. The top of the phone houses the SIM tray and one of the three microphones. The rest are located on the back and at the bottom of the device.

Since the device is waterproof, it lacks an audio jack and instead relies on the USB port for audio-out connections. The back glass is gently curved on the edges for easy hand-held operations. The only downside to the design is the relatively slippery feel from the extensive use of glass on the front and the back. For most users, purchasing extra protection cases or covers for this phone will be necessary.

Buyers will get some useful Nokia 9 PureView accessories out of the box. These include an 18W charger, headphones, USB-C cable, and a USB-to-3.5mm adapter.

The phone has an excellent 5.99-inch QHD + display with a 538 PPI pixel density. This means that text and images appear as sharp and pleasing to the eyes as on the best flagship devices today. There are no cutouts or notches on the display, as is familiar with most modern smartphones.

It is also quite easy to note the significantly large bezels on the top and bottom of the screen. However, these come in quite handy for placing your thumbs when taking photos with the camera. The phone’s P-OLED panel is quite bright and attains 727 nits of brightness when the display is set to auto-brightness adjustment. When set to manual, users still get an entirely usable 530 nits at maximum.

The screen also comes with four colour mode choices, namely Dynamic, Vivid, Cinematic, and Basic. These all have varying saturation and contrast levels depending on factors such as ambient light.

A 2008 Qualcomm Snapdragon 845 chip powers the phone. This is one of the significant downsides of the phone since more powerful and power-efficient models have since replaced the chip.

Since every image taken with the Nokia 9 PureView makes use of all the cameras, it was crucial to have a chip that can handle the image processing without draining the battery. However, the phone’s relatively low price implies that it might have been impossible to make use of a newer processor without driving the phone’s price high.

The phone’s octa-core processor and Adreno 630 GPU do a respectable job running most tasks. However, users will note some lag in the user interface, especially when using the camera. In terms of storage, the device only comes in one configuration with 6 GB RAM and 128 GB ROM. There is no micro-SD slot, though, which could be a deal-breaker for some potential buyers.

A non-removable 3320 mAh Li-Po battery powers the Nokia 9 PureView. This is only average considering the power requirements of the camera. However, the device supports fast wired and wireless charging up to 18W.

In a GSM Arena test, the phone lasted ten hours during continuous web browsing and thirteen hours of continuous video playback. In the same test, the smartphone got an endurance rating of seventy-nine hours, which is at par with other phones using the Snapdragon 845 chip.

The device uses a single bottom-firing speaker with excellent loudness levels. However, audio quality from the speaker is not great and lacks in frequency highs and lows. There are cheaper phones out there with better audio quality.

Here is a look at the phone’s software features;

The device comes preinstalled with Android 9.0 (Pie) out of the box. Like most modern Nokia phones, the Nokia 9 PureView is part of the Android One program, which guarantees uses of timely updates. However, carrier-specific models might not get updates as quickly as those sold as unlocked retail versions.

The device also features a feature called Glance. This allows the display to light up and show various notifications every time it detects movement. The screen then goes off after a predefined time. Some of the items that can be displayed include unread messages count, missed calls, and time. Users can also choose to leave Glance activated at all times.

The imaging department is supposed to be where the smartphone shines. While triple and quad cameras have now become the industry norm, Nokia upped the game with a camera setup having five cameras and a ToF sensor.

All five cameras have 12-megapixel sensors. Three of these shoot in monochrome while the other two shoot in the RGB colour space. The ToF sensor collects depth information for the out-of-focus effects. There is also a small LED flash with a metallic ring around it. All five cameras have a fixed focal length (28 mm), unlike most modern smartphones that feature wide, standard, and telephoto cameras. The phone merges images from all five cameras into a single image with an excellent dynamic range. Nokia promises up to 12.4 stops of difference between the pictures. This results in unparalleled dynamic range and scene depth.

This smartphone is the ideal device for photo enthusiasts who have no problem tuning their pics in post-processing software. This is due to the phone’s ability to capture fantastic RAW images in DNG format. This allows fine adjustment to highlights, shadows, noise, and sharpness in image-processing software.

RAW files from the camera are of excellent quality. However, the same cannot be said of JPG files. While these have perfect contrast and colour, they are often over-sharpened, which messes up with the details. The dynamic range within the images is excellent, though not anything that other flagship phones cannot produce.

The phone can record 4K video at 30 frames per second. However, there is no optical image stabilization. This could lead to shaky footage when shooting hand-held. There is an option to save only JPG files or RAW and JPG files. The latter will quickly fill up the available space and take quite long while saving. For example, saving a single image as RAW and JPG can take up to twenty seconds, which is irritably long.

Here is a look at what people think about the device on social media;

The Nokia 9 PureView is full of technological potential, an aspect that seems greatly underutilized. The use of a previous generation chip is arguably the phone’s greatest undoing. However, features such as an excellent P-OLED display, wireless charging, and good RAW image quality all make the device a worthy purchase. Potential buyers can also consider the Samsung Galaxy S10, Huawei P30 Pro, and the Xiaomi Mi 9, which are its main competitors.

The Nokia 9 PureView is an excellent device, but only to a particular target market. Photographers who prefer to shoot RAW images and edit in post-processing will find the device quite appealing. However, the buggy interface and constant freezes while using the camera might discourage other types of buyers. It will be interesting to see whether the PureView camera finds its way into future Nokia models.