Motorists who ply the Shagamu-Ore expressway have cried out over how personnel of the police, Nigerian Army and the Nigerian Customs Service (NCS) extort them on a daily basis.

The commercial drivers lamented that the officers collect not less than N100 to N200 from them each time they ply the road that link Ogun and Ondo states, Guardian reports.

The victims said that it is even worse and come to a point of real negotiation between them and policemen if their vehicles carry foodstuff like bags of rice.

One of the motorists, speaking to journalists recently revealed: “I part with a total of N2,400 right from the first road block in Ogun state to the last one in Ore, Ondo state.

“The number of checkpoints increased almost immediately Pa Fasoranti’s daughter was killed along the road.”

The commercial driver, who refused to mention his name said that he and his colleagues will be forced to increase the transportation fare if the trend continues.

He said: “We’ll have no other option than to increase fares if the men continue to harass and extort us.”

Another driver wailed: “There are about 15 checkpoints from Shagamu to Warri, they stop and search and when they do not see anything, they ask for vehicle document and even after providing them, they still collect money from you. These guys are on the road round the clock.”

Meanwhile, Legit.ng reported that Babatunde Fashola, the minister of works and housing, had responded to mixed reaction that greeted his recent comment on most federal roads in the country. 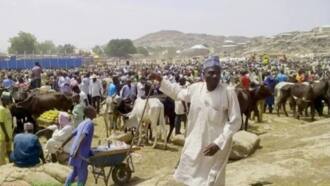 Cattle dealers threaten to embark on nationwide strike, give reason

The minister, clarifying his statement on Sunday, November 10, in Ondo state during the roads funded by chairman,Toyota Nigeria Limited, Chief Michael Ade-Ojo, said that his remark was misquoted.